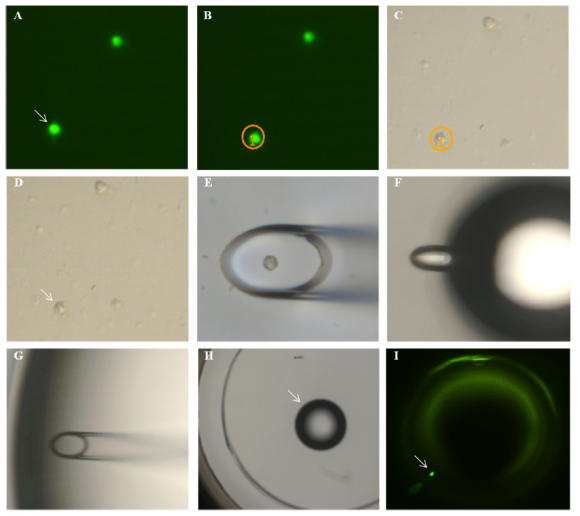 Circulating epithelial tumor cells (CETC) are considered to be responsible for the formation of metastases. Therefore, their importance as prognostic and/or predictive markers in breast cancer is being intensively investigated.

Here, the reliability of single cell expression analyses in isolated and collected CETC from whole blood samples of patients with early-stage breast cancer before and after radiotherapy (RT) using the maintrac® method was investigated. "To only collect viable cells, cells with morphologically intact cell membrane and nucleus as well as an intense EpCAM signal were selected. The cell suspension was prepared to allow aspiration of only one cell into the capillary. Selected cells were individually aspirated semi-manually with an MMI CellEctor (MMI, Eching, Germany) into 100 nL buffer solution into a glass capillary and transferred into a 100 µL PCR cup, making sure that only this one cell was deposited."

Single-cell expression analyses were performed with qRT-PCR on a panel of selected genes: GAPDH, EpCAM, NANOG, Bcl-2, TLR 4, COX-2, PIK3CA, Her-2/neu, Vimentin, c-Met, Ki-67. In all patients, viable CETC were detected prior to and at the end of radiotherapy. In 7 of the 9 (77.8%) subjects examined, the CETC number at the end of the radiotherapy series was higher than before. The majority of genes analyzed showed increased expression after completion of radiotherapy compared to baseline. Procedures and methods used in this pilot study proved to be feasible. The method is suitable for further investigation of the underlying molecular biological mechanisms occurring in cells surviving radiotherapy and possibly the development of radiation resistance.